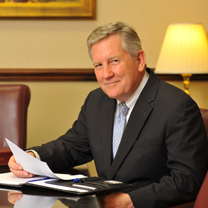 Mr. Schaeffer is a partner of Council Baradel.  He began his legal career as a Law Clerk to the Honorable E. Mackall Childs  in the Circuit Court for Anne Arundel County.  He has been admitted to the Maryland State Bar since 1979 and is also admitted to the bars of the Federal District Court, the Bankruptcy Court, and the U.S. Court of Appeals (Fourth Circuit).  Since 1980, he has concentrated his practice in the areas of Domestic Law, Contract Dispute, Intentional Torts, and Civil Litigation.  He is a past-President of the Anne Arundel County Bar Association, a past Board Member of the Maryland State Bar Association, and is the current Chairman of the AABA’s Barrister Newsletter Committee.  He has also been a Board Member of the Board of Trustees of Indian Creek School, among other organizations.

Over his 35 years of practice, he has acquired significant experience and met with success in the State and Federal trial courts of Maryland.  He has also participated in countless negotiations, mediation and alternative dispute resolutions, acting as mediator or court-appointed trustee in many cases. He enjoys a strong reputation among the County Bar and among his clients and former clients; representative reviews of Mr. Schaeffer’s work by his former clients can be found at Avvo.com.